The Advent wreath, or Advent crown, is a Christian tradition that symbolizes the passage of the four weeks of Advent in the liturgical calendar of the Western church. It is traditionally a Lutheran practice, although it has spread to many other Christian denominations.

It is an evergreen wreath with four candles, sometimes with a fifth, white candle in the center. Beginning with the First Sunday of Advent, the lighting of a candle can be accompanied by a Bible reading, devotional time and prayers. An additional candle is lit on each subsequent Sunday until, by the last Sunday of Advent, all four candles are lit. Some Advent wreaths include a fifth, Christ candle which is lit at Christmas Eve or Christmas Day. The custom originated in family settings but has also become widespread in public worship.

The concept of the Advent wreath originated among German Lutherans in the 16th century. However, it was not until three centuries later that the modern Advent wreath took shape.

Advent wreaths are circular, representing God’s infinite love, and are usually made of evergreen leaves, which “represent the hope of eternal life brought by Jesus Christ.” Within the Advent wreath are candles that generally represent the four weeks of the Advent season as well as “the light of God coming into the world through the birth of Jesus Christ” although each of the candles can be attributed its own significance as well; in one version of such interpretation, the candles specifically symbolize the Christian concepts of hope (week one), peace (week two), joy (week three) and love (week four). Many Advent wreaths also have a white candle in the center to symbolize the arrival of Christmastide, sometimes known as the “Christ candle.” It is lit on Christmas Eve or Christmas Day. The Christ candle is colored white because this is the traditional festal color in the Western Church. Another interpretation states that the first candle is the Messiah or Prophecy candle (representing the prophets who predicted the coming of Jesus), the second is the Bethlehem candle (representing the journey of Joseph and Mary), the third represents the shepherds and their joy, and the fourth is the Angel’s candle, representing peace.

In many Catholic and Protestant churches, the most popular colors for the four surrounding Advent candles are violet and rose, corresponding with the colors of the liturgical vestments for the Sundays of Advent. For denominations of the Western Christian Church, violet is the historic liturgical color for three of the four Sundays of Advent: Violet is the traditional color of penitential seasons. Rose is the liturgical color for the Third Sunday of Advent, known as Gaudete Sunday (from the Latin word meaning “rejoice ye”, the first word of the introit of this Sunday); it is a pause in the penitential spirit of Advent. As such, the third candle, representing joy, is often a different color from the other three.

In other Protestant churches, especially in the United Kingdom, it is more common for Advent wreaths to have four red candles (reflecting their traditional use in Christmas decorations). An Advent wreath given to Pope Benedict XVI of the Catholic Church also had four red candles. 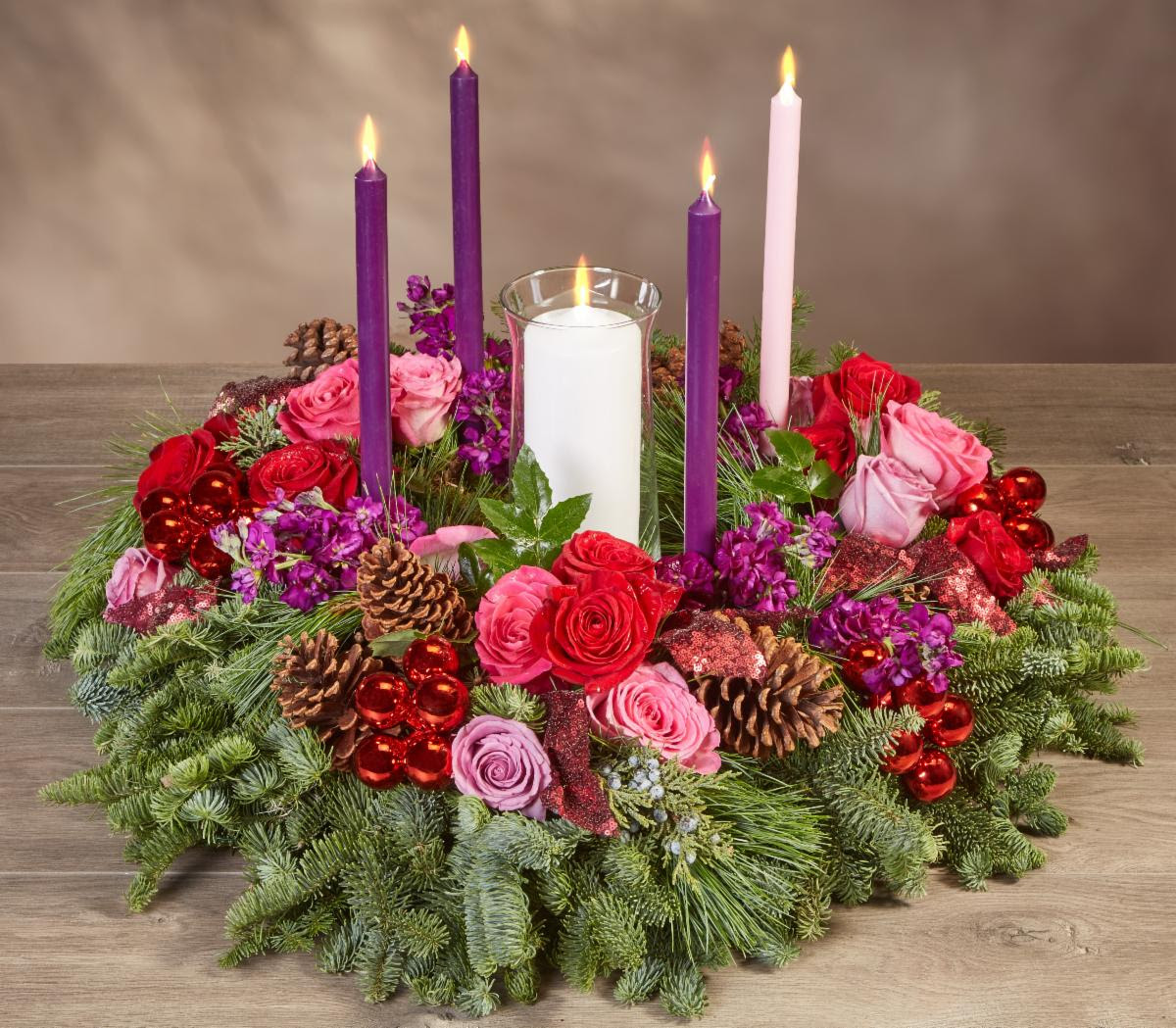 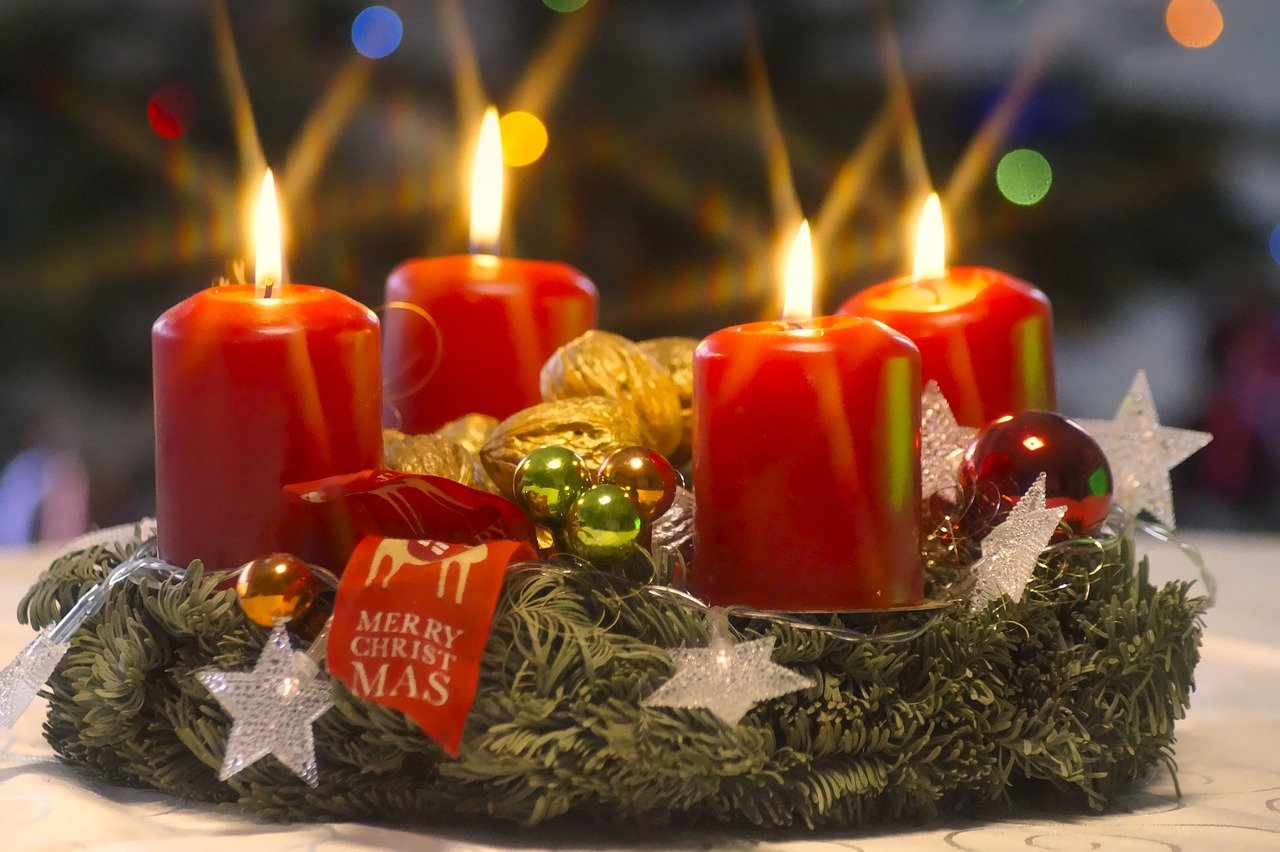 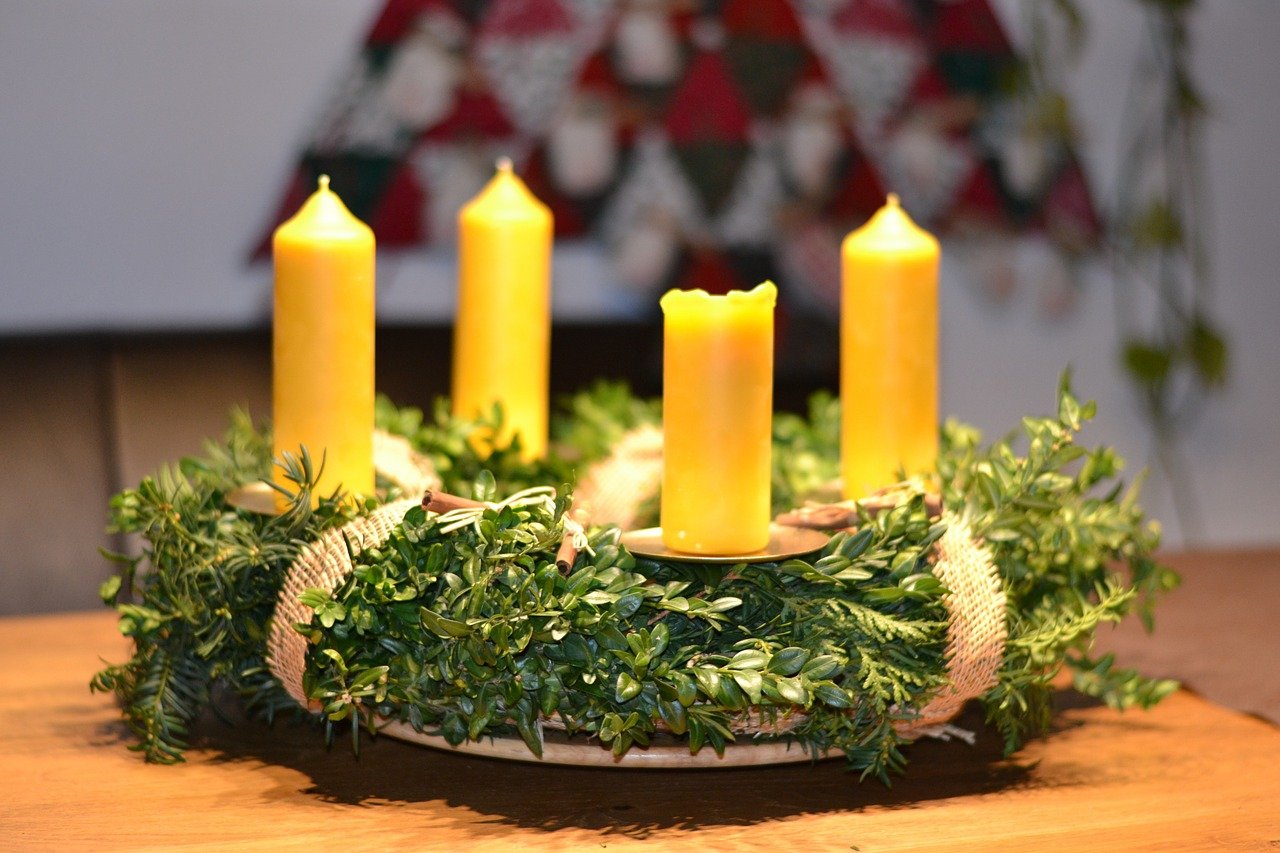